At least two boats passed our mooring at RWBC heading down stream. One was Robin Hood, a hire boat.

We emptied two cassettes, filled up with water and disposed of rubbish.  Hazel had bought some plants in Retford, and she had planted them out yesterday. We watered them well this morning before putting them on the roof.

As we set off under the bridge, we passed Firefly moored up. We hadn’t realised he moored here at the club.


We had only gone a few boat lengths before James had to visit the weed hatch and remove a pile of the green stuff. We find that if we go too slowly, such as when passing moored boats, we pick up weed. If we put too much power on, the stern digs down, and again we pick up weed. A moderate steady speed seems to do the trick, with an occasional reverse thrust to clear the prop in deeper water or shady areas like under bridges.
It was a very hot day, and James regretted his error with the hood, as some shade would have been nice. Harvesting locally had caused a lot of dust settle on the water, so the fish were not so visible.

As mentioned in this blog earlier, there is a bridge in Wiseton officially called “Lady’s Bridge”. It is otherwise known as “Old Man Bridge” because of the stone effigies above the arch. We recently had a communication from Canal and River Trust which referred to it as “Man Face Bridge”

Drakeholes Tunnel is very short and you can see right through. Even so, Health and Safety has gone to extremes, and we are advised to sound a horn, use a tunnel light and wear a lifejacket.

Gringley Lock had only one top paddle working, and it took a long time to fill, as there was severe leakage through the bottom gates. Having brought the boat in, and raised one of the bottom paddles, we found it impossible to walk across the gates as the handrail and the paddle gear were too close together. Moreover, the adjacent bridge was fenced off so that we couldn’t use it. We just took our time and used the one paddle. It was too hot to walk round.

The next lock was Shaw Lock, which had hydraulic paddle gear with a square spindle. The bridge below it had W&GN 1830 engraved on a stone above the arch. Not sure what these initials stand for.

We passed what we thought, on the way up, might be the start of a new marina. On reflection, we think it was an old canal basin for the brickworks. It has since been disconnected from the canal, perhaps to save water.

We passed the two hire boats, Robin Hood, and Maid Marian, moored where we had stopped on the way up. That mooring faces south, and had no shade.  We chose a spot further round the corner, after Manor Farm Bridge, facing east, so we would have shade for the afternoon. It was opposite a winding hole, where usually we shouldn’t moor. However, James had seen it as a suggested mooring option on the website for the Chesterfield Canal Society. The only boats we saw going past after that were the two hire boats again, on their way to West Stockwith on the last day of their hire period.
It was a peaceful place, except for a baling machine behind the hedge. It was a huge field, so he didn’t come past very often. We then had a yellow light sunset. Two tawny owls in the willow trees opposite.

This morning we awoke to the sight of mist.

We didn’t have far to go today, but we still had a weed hatch visit. We saw swallows and rabbits before our shopping stop in Misterton, where we visited the excellent butcher, and also the Co-op.

The final two locks followed, and as we arrived at the bridge into the basin, we saw Deres Arv moored. They had been on the summit pound with us briefly.

We found a mooring, stern on to the quayside, next to the two hire boats. These are apparently visitor moorings. We had thought they were for permanent moorers.

We spoke to the lock keeper about the man who sells diesel using a mobile tank, but when we rang, we found he had given up a year ago.  As were a bit low, James emptied one of the spare cans into the tank. We don’t want to run out on the tidal Trent!

We went for a meal at the Waterfront Inn, which was very close by. Proper pub food.

James started chatting to Martin and Karen of Sousant, moored alongside us. They had arrived from Keadby this morning, and were going to do the Chesterfield. They mentioned that the Trent Aegir was due in a few minutes, so we went to watch it. It happens when the incoming tide meets the river flow, causing a wave going upstream, like the Severn Bore. We arrived at the the lock entrance, and the tide was flowing out. Suddenly there was some splashing and there was a small wave, and the river was flowing the other way.

Worksop to RWBC at Clayworth

We departed fairly early, hoping that the bored youths of the town would not be up and about. We went down through Stret Lock, and past the place where we turned in 2005, having got stuck in the lock. The turning place is the entrance to an old canal arm.

Worksop Town Lock is difficult, as it is half covered by a low road bridge. The approach is via a narrow channel. There is only one paddle on the lower gates, and there is no way across. Thankfully, we managed OK.

This is followed by the Straddle Warehouse, an unusual building that is over the canal. 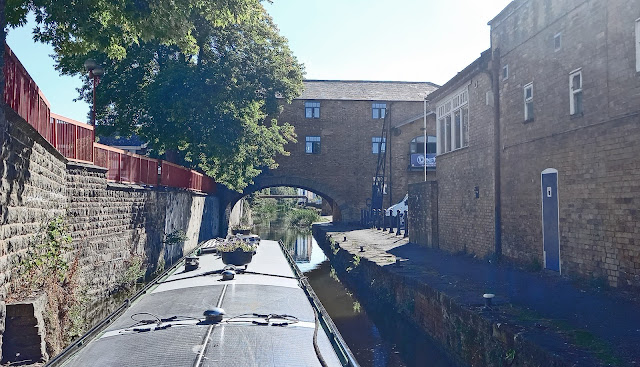 At Bracebridge Lock we met Will, the CRT man we saw on Saturday at the Lock Keeper. He was most helpful, locking us through both Bracebridge Lock and Kilton Lock, pointing out where the shallow places were.


After we left Kilton Lock we met a boat coming the other way. They probably had the same help from Will.


We only wanted to get away from Worksop, and we had spotted a possible mooring on the way up the canal, just East of the three bridges at Manton.

No boats passed after we moored. This canal is very quiet. We had a few walkers and a cyclist or two. Then three polite lads turned up asking if we could help them as their dog had cut itself on some barbed wire. We couldn’t do more than bathe the wound in clean water, and give the lads a drink.

We had at least two owls close to the boat in the night. It was a peaceful mooring.


We noticed that the harvest had started since we came past ten days ago.

We had a mishap in Long Bridge at Osberton. We had some weed on the prop which limited our steerage, and James should have taken the hood down. We had enough clearance if we were central in the bridge, but the bridge name says it all – it’s like a very short tunnel. The bows moved to the left and the bow thruster is not functioning properly due to weed. We attempted to stop, but couldn’t prevent the hood from scraping the underside of the bridge, ripping the fabric. Oh dear! Repair bills ahead! 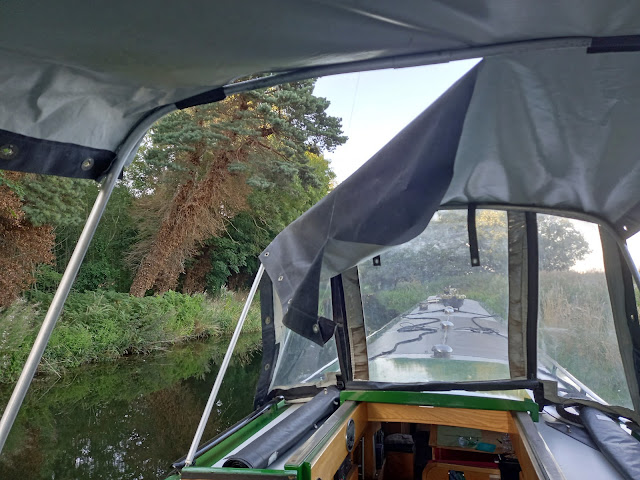 We were soon through Osberton Lock, and we had better success with the weed along here than last time. Perhaps this was because the weed cutter had been at work.


We suddenly found ourselves gaining on a boat in front, which we later learned had just turned in a winding hole before Ranby. We followed them through to the Forest Locks.

In Ranby we spotted Firefly, the boat we had met at the Lock Keeper pub a week ago. We emptied cassettes at Charlie’s Lock, officially known as Forest Middle Top Lock

We learned that the ladies on the boat in front had just seen what they called a Water Snake. The other name for a grass snake is the European Water Snake. Shame we missed it. We haven’t seen one this year. We had seen lots of dragonflies of all different colours and sizes, plus a kingfisher, and a bird of prey flying over which we didn’t have time to identify, but it was smaller than a buzzard and was not gliding. Probably a sparrow hawk.

We moored on the visitor mooring just below Charlie’s Lock. There were lots of fish in the clear water.

James tightened the stern gland as it had been dripping.

We are warming up for another heatwave, so the forecasts tell us. We certainly had blue sky today, as we set off through the remaining Forest Locks to Retford.

The water was really clear, and we saw countless fish, including roach, perch, two pike, and a large chub (probably). There was also a shoal of a dozen large bream. At West Retford Lock we met some ladies who were interested in Canal Ministries, so they received appropriate leaflets.

We found a shady mooring above Retford Town Lock, and we both went to have haircuts. We also found a replacement for our racquet insect zapper. A visit to a café for a cold drink was essential in the heat, and then we cooled down in Aldi before returning to the boat to set off once more. 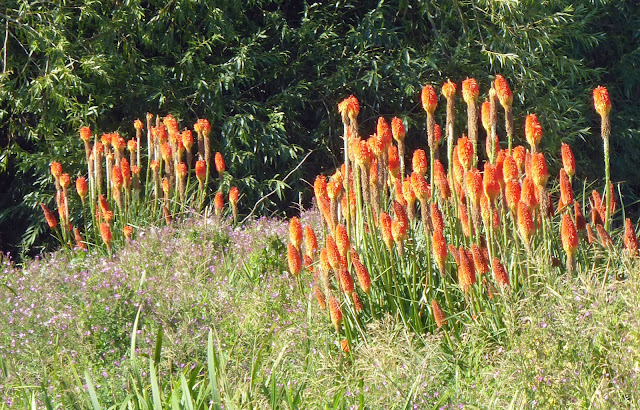 We passed Firefly moored below the Town Lock. We moored up on visitor moorings at Clarborough, and Firefly came in behind us later. We had a Canal Ministries Zoom meeting.

Firefly left early, presumably to avoid the heat of the day. We followed a bit later.

As we cruised, a tern was following us, catching fish in our wake. There was also a large heron on the branch of a tree, and a swallow on a wire. We didn’t have any problems with weed, although we took it slowly. We did have to avoid some islands of reeds at times. 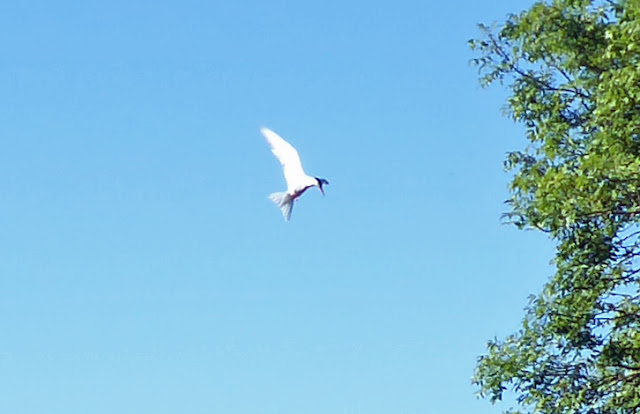 We saw some smoke a long way off and wondered if it was a wildfire. Another boater said it was tyres burning.
We moored at RWBC, and were pleased to be under a tree for some shade. James collected his parcel, so that we can now repair our fourth cassette.

We wanted to visit the church at Clayworth, which has famous wall paintings, but we couldn’t find the bus stop, and even then, the bus didn’t turn up. It was too hot to walk, so we decided to visit by bus later from either Misterton or West Stockwith.

We had our meal outside, with plums falling from the trees above.

Next: Two days to get to West Stockwith, then out on the tide on Sunday back towards Newark.