James went to collect the boaters pack from the water space office, as well as the tickets for the evening meal, and the change from Pat Barton, and the brass plaque, with theme: “Canals in Bloom”. 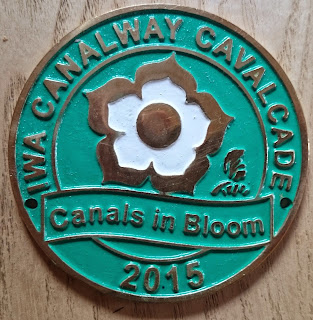 Then there was the usual shuffling of boats, because those with moorings in the Pool were not allowed in until 6pm, when the trip boats had finished operating. Meanwhile they were temporarily moored in other places, including on other boats moorings. When we had finished, we had Hallmark in front of us, with Dave and Maggie, whom we had met two years ago at the quiz.  Behind us was Cider with Rosie.  We had no boat on our outside, although Daddy-long-legs was meant to be there.

We saw Eric and Sue go past on Cherie.  They are always at this event. We have also spent time with them at other places including Skipton on the Leeds and Liverpool Canal.

Further along the towpath was Fulbourne, last seen sharing our pontoon in Aylesbury.  Trinity was also there, with Henry and Lin and visiting family.  Sola Gratia was also there, with Tim and Tracey and guide dog Oakley.  In the Pool we saw Annie and Walt, BCF boat owned by Lorraine and Mike.  At the end of the boats in the Pool was a coot’s nest with very young baby coots.  Over the weekend they must have had their photos taken a thousand times. We walked to the beer tent where the fish and chip supper and quiz was to be held. 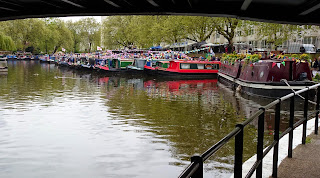 Boats in the Pool

Coot nest – stars of the show

The beer tent was particularly well stocked this year, with Old Rosie cider, which didn’t run out.  Who cares about the rest of the selection such as beers?  The fish (or chicken) and chips was expertly delivered and well received.

We had a good BCF quiz team, with Peter and Fran, Tim and Tracey, Lorraine and Babs and ourselves.  Mike wasn’t there as he was a council candidate and apparently there was an election on or something.  We did well, coming equal first out of about eight teams.  Sadly we lost the tiebreak question, so we didn’t win the box of chocolates. It was all good fun.  Unfortunately the place was very crowded, and there wasn’t room to accommodate Dave and Maggie from Hallmark on our team.

We had a good look round the stalls in the morning, as it was fairly quiet, and we had Greek souvlaki from one of the food stalls.  We saw Caroline who was there for the day playing her saw.

In the afternoon we were by the boat, and we had a visit from Peter and Valerie Hodges from Ruby. They had come by car on this occasion. 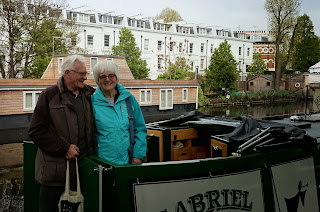 Later we were having a last minute music practice before heading for the open mic evening.  There was a knock on the door and a man said: “I’m here for a cup of tea”. We didn’t know who he was, and he was obviously inebriated.  We explained that his timing was less than perfect, as we were just about to leave for the evening entertainment. He said: “OK, I’ll call back in half an hour”.  He said his boat was only three boats away. We firmly turned him away, suggesting he come back tomorrow.

A few minutes later, when we were walking to the beer tent, carrying instruments, we saw he was on board Sola Gratia, where understand he fell asleep.  His boat was not in Cavalcade and was some distance away.

The open mic session was much more limited than when we used to run it with Byfleet Boat Club.  We had a team of people going round all the boats enlisting support and participants, so we had a good selection of people taking part.  This time the MC was Chucklefoot, who had already performed several times in various locations that day. There was also a folk trio who were guest artists.  In the end there were only four participants from the floor – Jan, Peter and Fran, Eric, and us.  We each sang three songs and there were no second sets. However, it was all good fun, and we went down well. We sang “Long way down” “Put your sweet lips” and “Waterloo Road”. 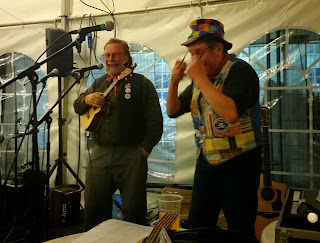 We had rain in the night. This was originally forecast for Saturday, but thankfully held off until the small hours of Sunday.  We walked back to the beer tent once more, this time for the worship service led by Graham Nunn and his Church Army team.  This was very informal, with music ably led by one lad on a guitar, and a message from Graham, accompanied by a magic trick with ropes.  We had about forty people, and many went aboard the Church Army wide beam hire boat afterwards for coffee and cake.  Very civilised.

Worship in the beer tent

Back at the boat, the sun came out, and we put out a table with literature.  We were amazed at how many leaflets were taken when we weren’t actively in attendance.  We had a few conversations with people, and one in particular with a lady called Catherine, who is searching. 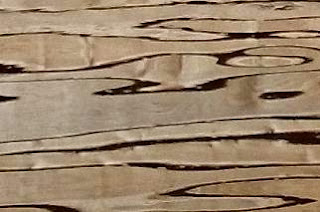 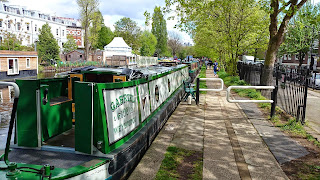 Our mooring at Little Venice

Many people including us were finding they were coughing and their eyes were watering. The consensus was that it was the plane trees that caused it. There were very fine fibres all over the boats underneath the trees.

In the early evening we returned to the food stalls for a Mexican wrap, and then from the stern of our boat we watched the illuminated procession, which took place from about 9pm. It was a pleasant dry evening, and was good to toot and wave at all the participating boats. There were only about ten boats, whereas in previous years we have seen up to twenty taking part.  Sola Gratia and Annie and Walt took part.  We have given away all our lights, as we have no space to store them.

Again a dry day today, despite forecast rain.  We had lots of conversations with friends and acquaintances from other boats. More leaflets went out.  We decided to have another walk round the site, this time going into Rembrandt Gardens, which was packed with people enjoying the sunshine.  We had more fast food from the stalls, and watched Chucklefoot doing a one-man band set. 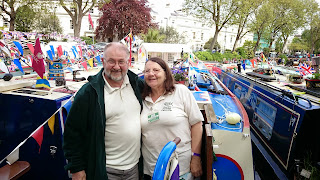 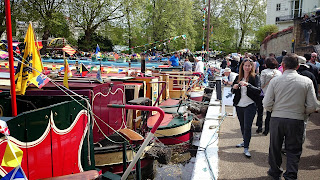 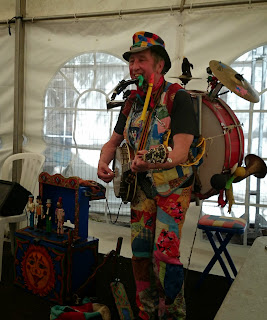 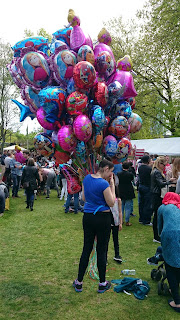 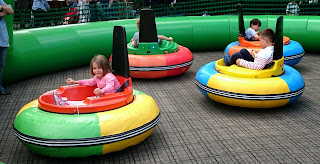 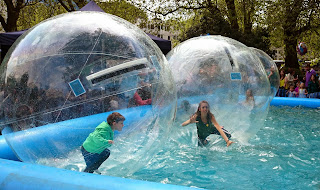 The view from Rembrandt Gardens

The event now over, we decided to see some London sights, so we took a bus to Trafalgar Square at looked round the National Gallery.  We thought it was appropriate to see a canal-etto (get it?).  We also saw Constable’s Haywain. We have been to the place where it was painted. The cottage is still there, but the cart has been moved! 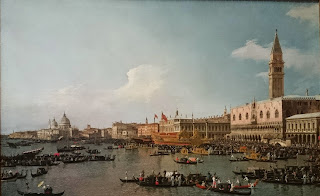 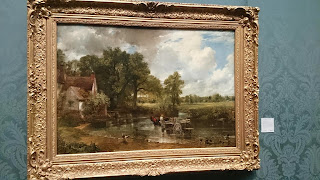 We had a snack lunch in a café before visiting the National Portrait Gallery for some more culture.  We saw a startling picture of Tony Blair.  Enough to wake you in the night.  Then we took a bus back to Little Venice. 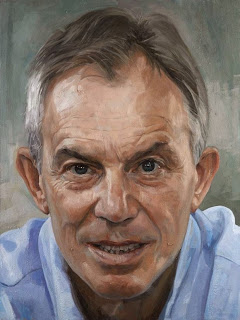 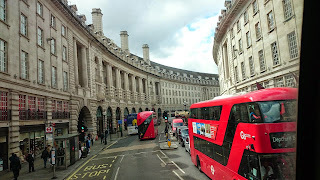 We needed gas.  We had left Aylesbury with one just started cylinder, and one full one.  On Saturday, six weeks later, the first cylinder ran out, so we replaced it with the new one. Last night, two days later, the new one ran out! Whether it was not properly full, or perhaps it leaked, or the gas piping leaked, we do not know.  This morning’s tea was made by heating the water in the microwave. We had established that the fuel boat MB Ash had one cylinder available.

We also needed to move our boat to Rembrandt Gardens, so we left our mooring and headed for the Paddington Basin Arm, where the fuel boat was.  The Pool was now empty of boats.  We drew alongside the fuel boat, and swapped the full cylinder for our empty one, and left £20 in the drawer inside his cabin, as arranged on the phone.  We then cruised to the end of the arm, turned around and came back to our new mooring on Rembrandt Gardens. 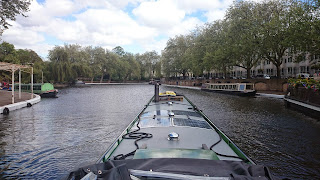 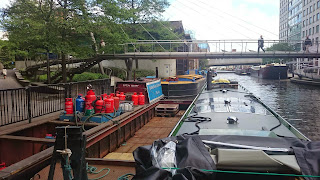 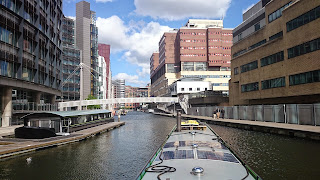 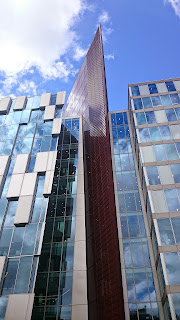 Our mooring on Rembrandt Gardens with more plane trees

When we settled at our mooring, Hugo went out, and was quickly chased back in by a young and enthusiastic brown dog.  It turned out that this was owned by a chap whose name we shouldn’t publish, and James had a long conversation with him.  He was a teacher and had been verbally abused by the youngsters he was trying to help. He was planning to give up his job. Unfortunately he had taken to drink to help him through, but it probably wasn’t helping. 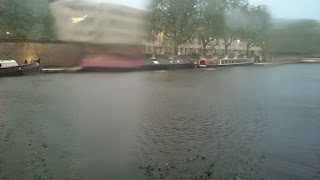 There was very heavy rain in the night and beyond dawn. The forecast was also for more rain during the day.  We saw Eric and Sue go by heading for the Lee and Stort.

As we had to go somewhere looking smart, we decided to take a taxi instead of buses, as a walk in a heavy rain shower would have rendered us bedraggled at the point of arrival.

We walked to Paddington Station (mostly under cover) and took a taxi to the RAF Club in Piccadilly, where we had a family gathering to celebrate the award of the MBE to my cousin Dick Bell.  It made us very proud to be part of it, and to hear him talk about what his Christian charity work in Nicaragua involved. 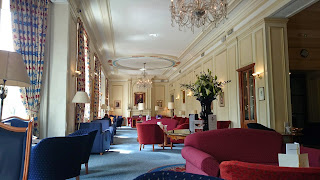 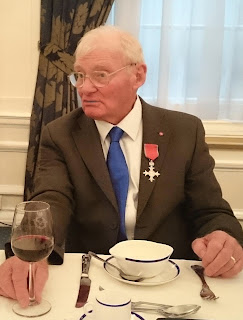 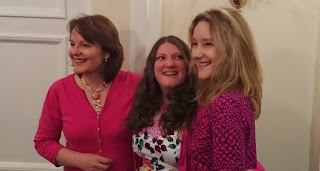 We then took a bus to Aldwych with Maggie and Clive, and spent a pleasant time in a pub there, until they went to catch a further bus to Liverpool Street for their train home, and we went to the Aldwych Theatre to see a show. 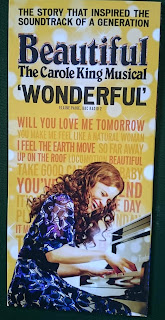 Excellent performances and very slick seamless scene changes. Thoroughly recommended. We were in the third row.  We hadn’t realised Carole King had co-written so many well-known songs.

Back on the bus to Paddington, where had a late snack in a Lebanese restaurant.

One more day in London, with a blank agenda. We noticed that the horse chestnut blossom was now out, possibly due to the recent sunny days.

We had a lie-in, and then took a bus to Oxford Street.

We had never previously visited Selfridge's.   Now that we have seen the prices, we probably won’t visit again.  We saw a pair of shorts, with the stitching fraying, and with rips in the fabric.  The price? £200! We asked where we might find some gloves for Hazel.  There was no glove department. It was all divided up under the designer names, so you had to know which designer might have gloves.

There was another section selling Rolex watches at around £35K. When we buy a watch we tend to leave off the K.  Beautiful window displays though. 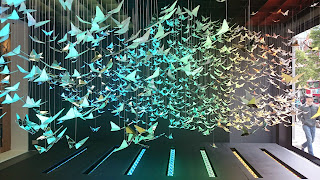 We took another bus to the Haymarket, and had a very pleasant meal in a vegetarian Indian restaurant, before wandering through once again to the National Portrait Gallery.  We had a look at some older pictures of Tudors and Stuarts this time.

Rather than take the same bus route back along Regent Street, Oxford Street and Edgware Road, we thought we would take two buses to find a different route. So we went up Charing Cross Road to Warren Street, and from there to Paddington. Long live the senior citizen bus pass!

We went to the amphitheatre in Little Venice to have a Mexican burrito before buying some milk in Sainsbury’s and returning to the boat.

Next time: Leaving London and heading to Uxbridge
Posted by James Bell at 11:09